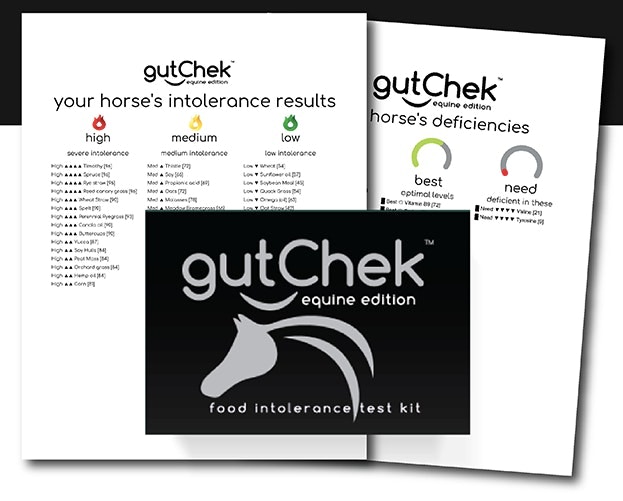 I have had several horses tested by gutChek to look more closely at their possible intolerances. Every result has been very helpful and I have been able to make positive differences to my horses well being. Three horses have had dramatic results that are worth sharing.

One horse's results showed some mild intolerances so we adjusted her diet accordingly. She always had mild flare ups with her eyes, which produced tearing and swelling and subsequent Itchy irritation. After changing her diet we noticed that she stopped getting this condition. We added the initial feed, back into her diet and she had a mild flare up again so we have kept the change in diet and she is doing great!

Another horse was very hard to get weight on, in spite of feeding all the usual weight gain feeds. He was eating very well and in regular work. When his results came back he was listed as highly intolerant to almost all of the feeds we were giving him so we changed his diet accordingly and the change in him was quite dramatic. He began to fill out gaining weight and muscle everywhere and his energy and ability to use himself easily changed remarkably. He was definitely a happier horse on normal amounts of feed.

The third horse that also changed dramatically is a two year old youngster that spent a lot of time laying down, rolling, not wanting to get up and looked like colic, although it wasn’t. He was very round, a good weight and growing well. He did look bloated though and seemed to have a lot of gas but was never treated for any kind of colic. After getting his results we made a simple change in his feed which we thought would take several days to take effect. He actually looked much less bloated and was far more comfortable the next day. He has remained comfortable and is not showing any of the previous symptoms.

HorseChek believes that knowledge is power. Their goal is to provide you with the knowledge to make informed decisions & take the guesswork out of supporting your horse’s wellbeing.

HorseChek has been in the food intolerance testing business for over 11 years. For the first 5 years, they offered a blood test for their clients, but found that it was influenced by what they had eaten over the past 24 to 48 hours. They switched to hair testing about 4 1/2 years ago and have found it to be more comprehensive. Because of this change, they saw an opportunity to work with their favorite vets and develop the equine test.

Learn more about the gutChek Equine Dietary Test Kit and order yours on Equivont! 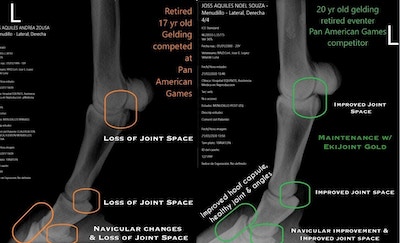 Retired Pan American Games Eventer. From Lame to Back in the Game