Know Everything About Horse Bridles

What are Horse Bridles? 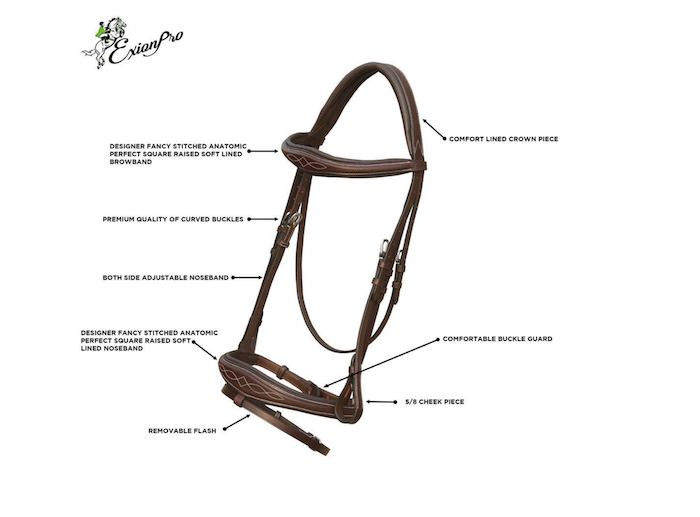 A bridle is the most basic part of the horse's headgear. It is used to direct a horse. The bridle is the main source of communication and control with the horse. It comes in different sizes pony, cob, horse and oversized. When choosing a bridle for your horse, it must be properly fitted to your horse’s head, otherwise, he’ll be uncomfortable and your aids will not be communicated effectively.

Two primary varieties of English bridles are single or Snaffle bridles and double bridles. A single bridle has one bit and one set of reins and is used with inexperienced riders. A double bridle has a couple of bits and two collections of reins. A bridle without a bit is described as a Hackamore. The English snaffle bridle is the most uncomplicated.

Parts of an English Bridle

The bridle consists of the following elements:

The crownpiece goes within the browband. The browband goes from just under one ear of the horse, over the forehead, to present below the other ear. The browband prevents the bridle from sliding back, toward the horse's neck. In individual sports, such as Dressage, beautiful bling browbands are very fashionable.

The noseband surrounds the nose of the horse. It is usually used to keep the animal's mouth closed or to add other pieces of material, such as martingales. The noseband consists of a long thin strap, which is placed under the bridle headpiece, and the loop for the nose. The nose buckle goes below the nose, while the large leash clasp is on the left side of the bridle.

A cavesson is a specific type of noseband used on English bridles wherein the noseband is attached to its headstall, held onto the rest of the bridle by the browband.

It goes from the horse's right ear, under the horse's throatlatch, and attaches below the left ear. The throatlatch buckles below the throat area, keeping the bridle in the yard by not leaving it to go too far ahead. A throatlatch should not be tightened too tightly, as the horse requires additional room to flex to breathe. The main objective of the throat latch is to prevent the bridle from getting off above the horse's head, which can happen if the horse rubs its head on an article, or if the bit is under in the horse's mouth and tightened reins propose it, loosening the cheeks.

The cheekpieces continue the bit. Change the buckles on the side of the horse's crest as evenly as feasible, but opt for a decent bit of height first. A snaffle bit should remain in the mouth's interdental location (between the sets of teeth)

The reins of a bridle attach to the bit, below the attachment for the cheekpieces. The reins are the rider's link to the horse and are seen on every bridle. Reins are often laced, braided, have stops, or are made of rubber or some other tacky material to provide extra grip.

The bit goes inside the horse's mouth, holding on the delicate interdental place between the horse's teeth. Leather rings are used to hold the cheeks of a full-cheek snaffle right.

The snaffle bridle is the most commonly used because of its versatility and functionality. The snaffle bridle can be used for most English disciplines including jumping, dressage, and trail riding. It can be used with a snaffle bit or with a Pelham or curb bit. It consists of one bit and one set of reins. The noseband of a snaffle bridle is designed to rest just below the cheekbones on the horse’s face. It has two rings on either side to which the reins are attached and is usually jointed, with a link in the middle of the mouthpiece. The noseband keeps the horse’s jaws aligned and prevents the horse from opening its mouth wide enough to avoid the bit and rein aids. When adjusted properly- not too tightly or too loosely —the noseband also transfers some of the bit pressure from the bars of the horse’s mouth to the nasal bone.

This bridle is observed in many English disciplines as well as with horse jumpers. The English snaffle bridle evermore has a cavesson noseband and, notwithstanding the name, is used with many various types of bits. A snaffle bridle consists of the many types of single snaffle bits, such as egg butt, loose ring, or D-ring snaffle, kimberwicks, gag bits, and curb bits, a single set of reins attached to that bit. Go to link 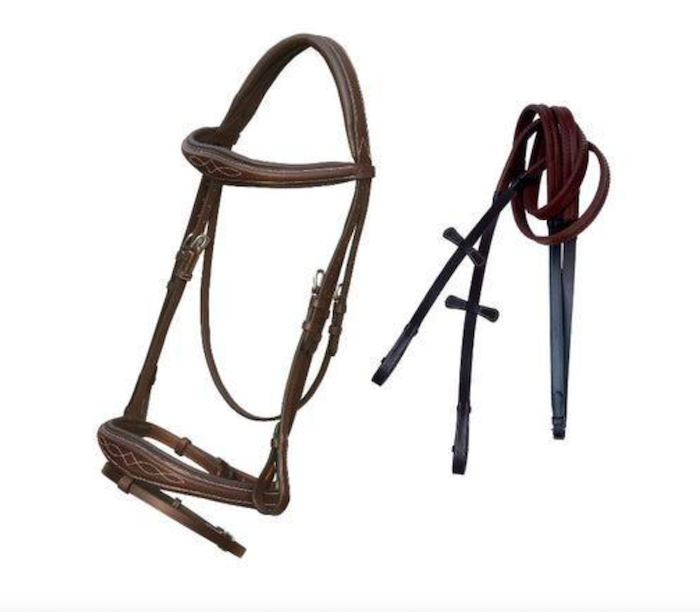 Dressage bridles are traditionally black, which coordinates with black dressage saddles, but you will see brown tack in dressage occasionally. Dressage bridles are generally padded bridles with flash nosebands. Nosebands can be either regular buckle or crank style. Anatomic Dressage Bridle is a huge trend, with large variations in design and lots of shine and bling! 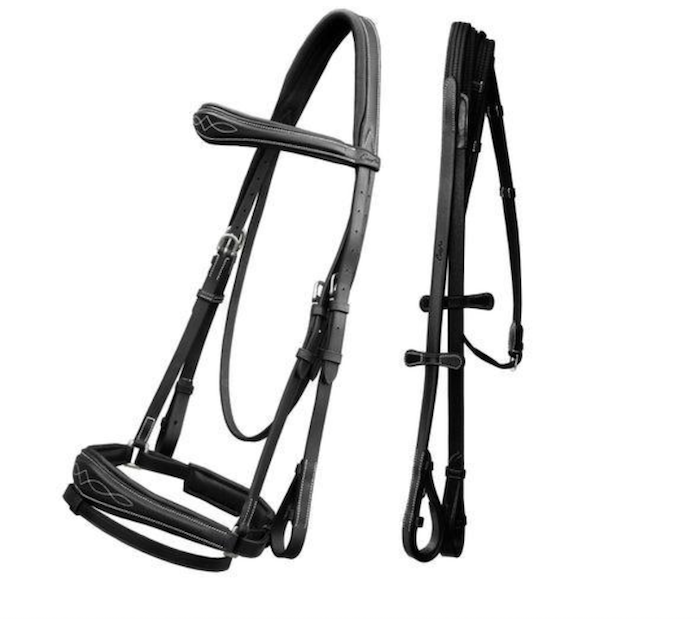 Figure 8 bridles have a noseband that crosses from the top of the cheek on one side, to the chin on the other side. This forms figure 8 after which the bridle is named. A Figure 8 bridle keeps the horse's mouth closed, or allows the horse to have more airflow through the nose. 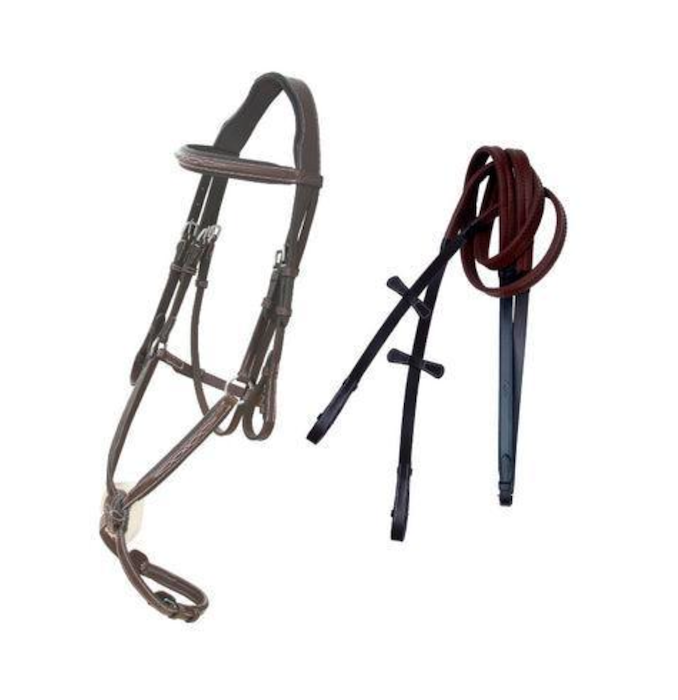 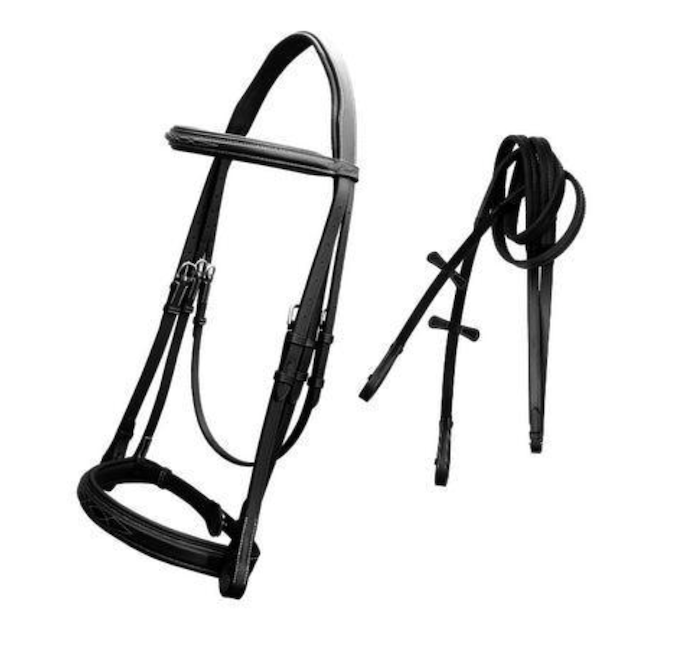 Weymouth or Double Bridle uses two bits at once, a small snaffle called a bradoon and a curb or Weymouth bit, and require the use of two sets of reins. Double bridles are usually only seen used in upper-level dressage, in Saddle seat riding, and for showing in certain other events that require formal attire and equipment. In the right hands, this bridle can improve performance; in the wrong hands, it can seriously hurt the horse's governing capacity. The Weymouth is practical for riding and racing in dressage and other ceremonious equestrian games such as Eventing. 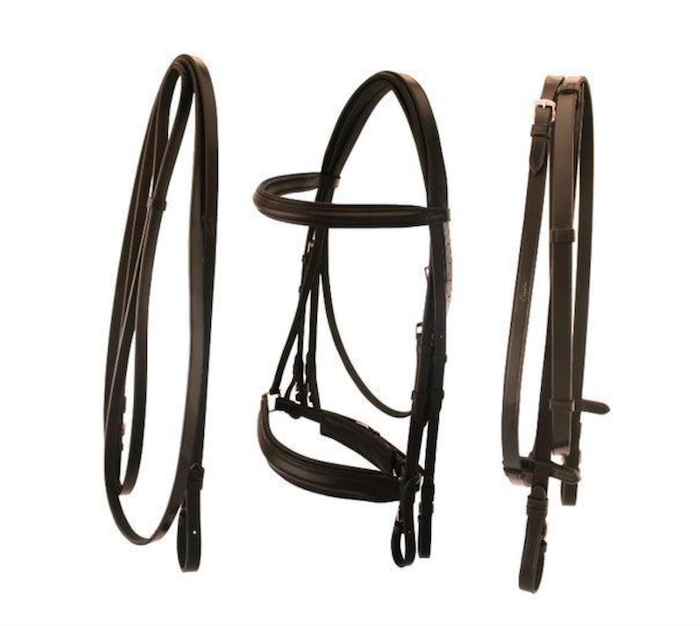 A bitless bridle is a general term describing a wide range of headgear for horses or other animals that controls the animal without using a bit. Direction control may also be via a noseband or cavesson if one is used. It might be used temporarily for the retraining of a horse that has been ridden by a heavy-handed rider or has suffered a mouth injury. It might be used because a horse has dental issues or difficulties tolerating a bit to such an extent that behavioural issues developed. Other riders choose to use a bitless bridle for the overall comfort of the horse. 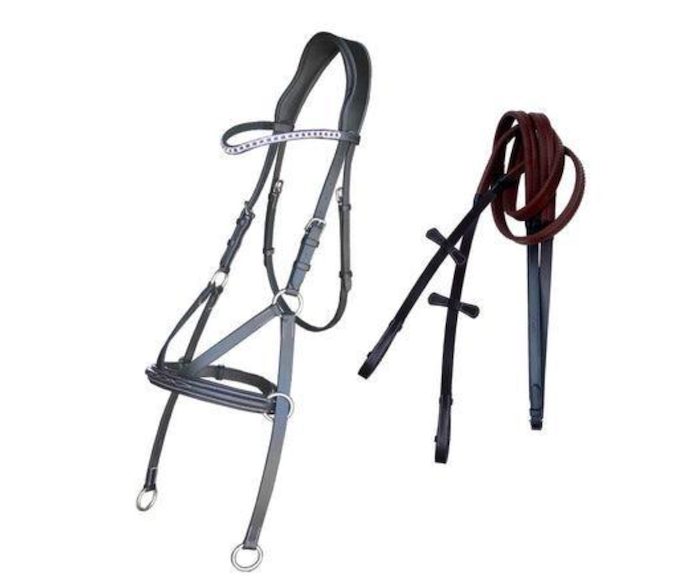 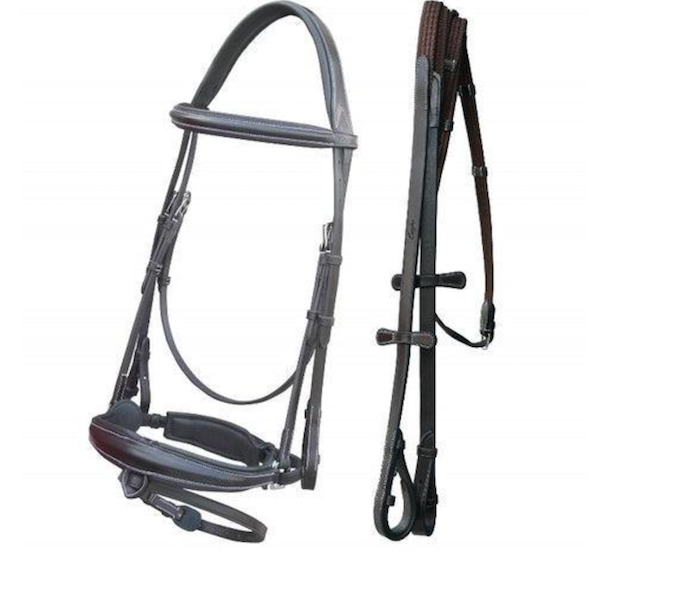 Horse reins create that all-important connection between a horse’s bit and a rider’s hands. Most bridles come with reins that are appropriately styled to match the look and purpose of the bridle. English reins come in a variety of styles for Dressage, Hunter Jumper, or Endurance. Horse reins come in laced, rubber, web, or woven styles. All horse reins should match the color of the bridle they are being used with.

Laced reins are used for schooling or show present a classic look. The leather is also laced to provide a better grip for the rider. Fancy raised laced reins have a stitched raised section where the lacing ends. They are generally used in America.

They are super grippy. The rider will feel more confident in riding the horse using rubber reins. They are generally used more in UK and Europe.

They are used when longeing a horse, attached from the bit to the saddle or surcingle, they are not meant to be held by the rider.

They are used with Hunter Bridles.

As the name suggests, they are plain long straps of leather. They impart very elegant and classy look. And is generally used in Dressage. They can get slippery when wet and hence are generally replaced by Laced Reins. 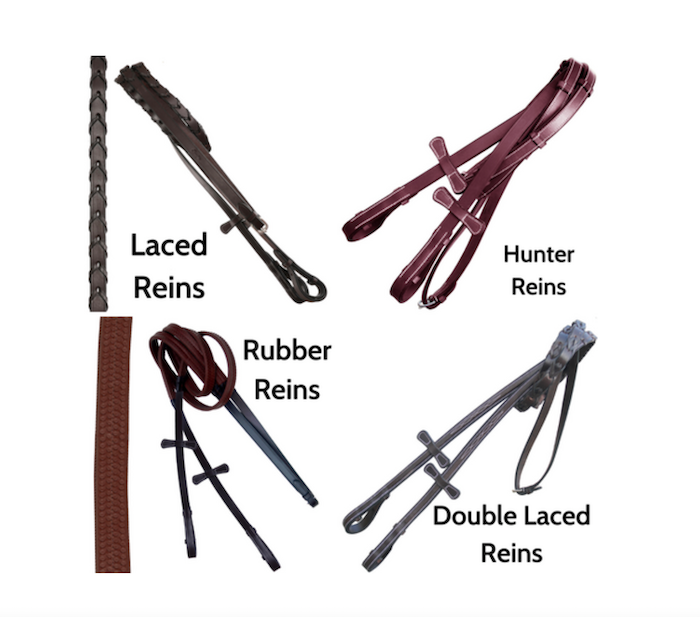 If you want to know more about any bridle from Bridles and Reins, you can contact us on our email purchases@bridlesandreins.com.

Originally posted on the Bridles and Reins Blog. 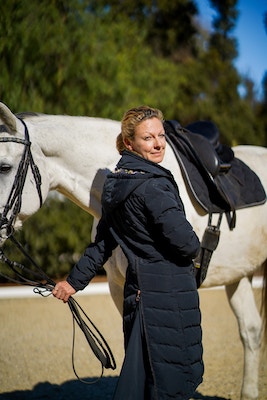 How to dress up your equestrian apparel for every occasion! 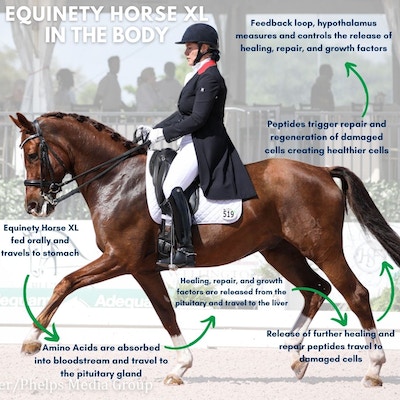 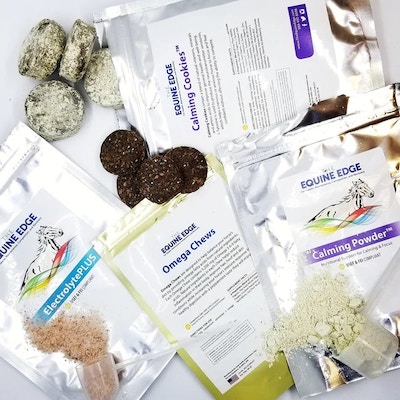 The 6 Best Supplements To Feed Your Horse This Summer