Lisa Takada: The Road to NAYC 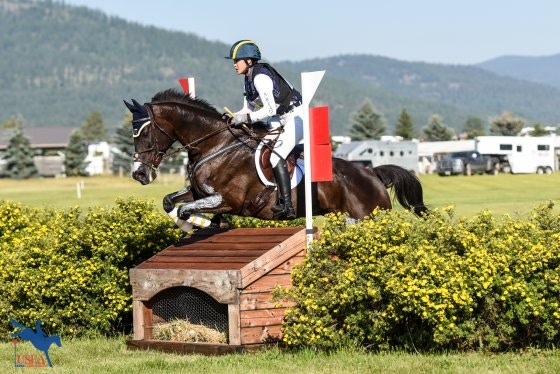 The Road to NAYC: Experience of a Lifetime

Republished from USEA on useventing.com

Lisa Takada and her 10-year-old Holsteiner gelding, Wishbone aka "Bones," traveled to Rebecca Farm in Kalispell, Mont. to represent Area VI in the Adequan/FEI North American Youth Championships and were part of the Area VI CICO2* bronze medal winning team. Lisa has been sharing her journey to compete in NAYC; click here to learn more about her and Bones and click here to read about her experience at Area VI Young Rider Camp.

And just like that, our NAYC week at Rebecca Farm has come to a close. I look back on the week with mixed emotions; there is an immense sense of pride for completing a longtime goal but also a tinge of sadness that everything I was looking forward to is now in the past and knowing I will not be able to relive all of the fun again next year (can we have an NAAARC — North American Adult Amateur Rider Championships?) 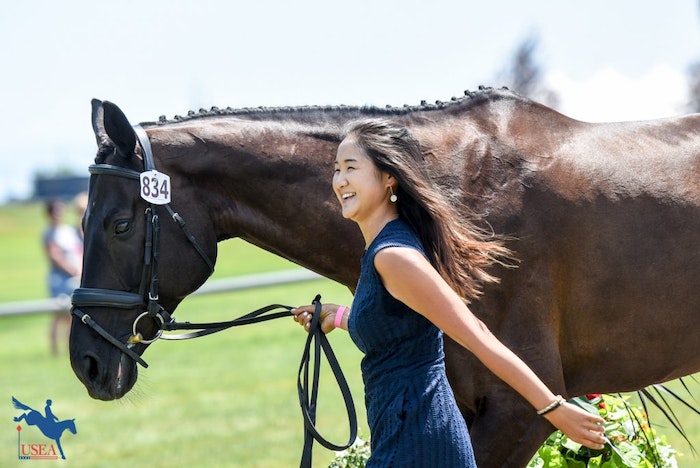 It’s honestly very difficult to put into a blog a recap of the week, because for me, it was probably one of the best weeks of my life. No, I didn’t win, and no, our teams didn’t win gold either. But, getting the opportunity to compete for the Area VI CICOY2* Team in itself is probably one of the biggest highlights of my riding career. Making the dream a reality is a surreal accomplishment, even when everything did not pan out exactly as I wanted it to. This was the biggest stage that I’ve ridden on so there were high expectations and a lot of pressure, but at the end of the day, the great experiences outweighed the few negatives that came from the week.

There is something magical about the atmosphere at Young Riders, beyond the impressive riding that I witnessed. What I observed was that every rider there is riding to win, fully dreaming of wearing that gold medal on Sunday morning, regardless of if they’re sitting on an Olympic horse or a scrappy self-made horse. I guess that’s true about any other horse trial, but there was an element there that I hadn’t felt before — a fighting sense that these “kids” had to really earn their way to this Championships stage. There was an incredible sense of strong work ethics, dedication to the sport and to each horse, and an appreciation among all. I think that’s what makes NAYC so exciting: All of the competitors are just as excited to be there and to compete as you are. Every day, I would think about how every single one of us has worked hard to have the amazing privilege to be competing in the coined Junior Olympics, so if something went right or wrong, each and every young rider felt that joy or sadness with you. I really do believe that every rider there was cherishing each moment and appreciating the horses, teammates, and grooms that got to share the experience with them. That unique energy amongst all of us riders made the whole trip so inspiring. 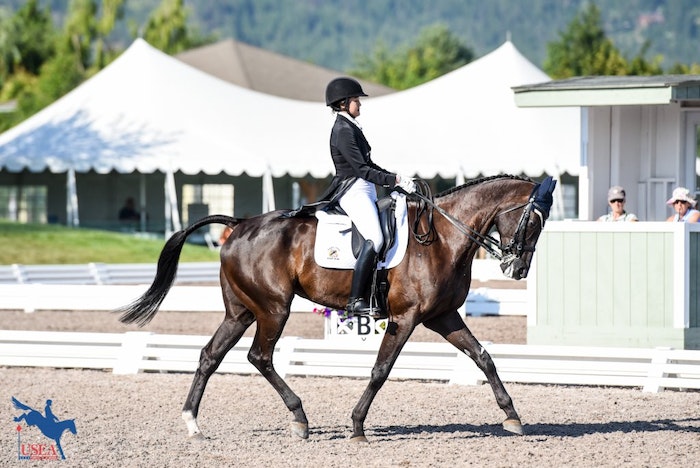 My horse Wishbone aka “Bones” brought his own energy to Rebecca Farm. He was electric all week, and I mean this in both good and bad ways! He probably had enough electricity of his own to fuel all of the excitement of Rebecca Farm. I had to ride him twice a day for most of the days during the week in hopes of getting him more relaxed for Thursday, which was the CICOY2* dressage day, but I think that each time he was out he was looking to skip to cross-country day. Given all of his jitters during the week, I actually thought we put in a decent test on Thursday and I was quite proud of him! My teammates each put in beautiful tests as well, all consistent and relaxed, which was the best we could’ve asked for. The following day, our CCIJ* team riders each delivered their best tests, which was so exciting to see. Their reactions said it all.

Ian Stark’s cross-country courses looked tough but doable. Being from California, we are familiar with Stark’s big and bold course designs, but there is a catch in that we are less acquainted to riding on grass and terrain. Initially, I felt a majority of confidence about the course but as cross-country day came near, I admittedly started feeling doubtful about some of the combination lines, as if I didn’t know what my plan would be — my nerves began kicking in and they blocked my sense of reason. My teammate and roommate extraordinaire, Kaley Sapper, kindly walked the course again with me late that night before cross-country and we nailed down our plans. I’m sure I would’ve been a nervous wreck in the morning had it not been for Kaley knocking some sense into me, so I was feeling extra thankful for her then! 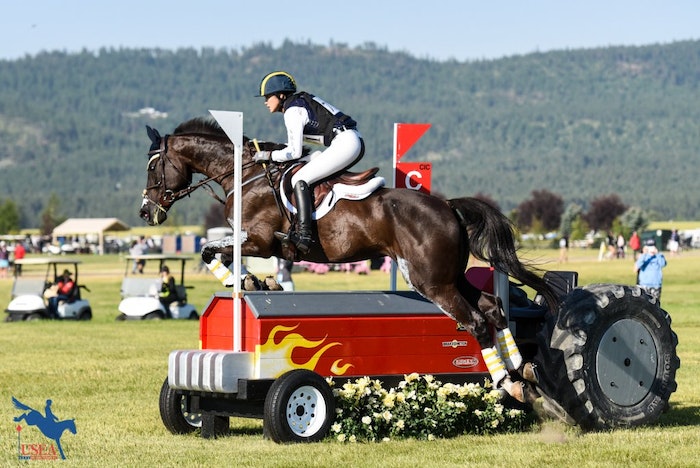 Kaley was first out the box on Saturday morning for Area VI and, to no one’s surprise, finished clear and inside the time. Bones and I were next; he was pretty thrilled to be out galloping on the Montana grass and we finished our second CIC2* course clear with just a handful of time penalties! Maddy Temkin followed, then Mallory Hogan — both also produced clear rounds inside the time! Our two individuals, Sophie Tice and Delaney Vaden made easy work of Stark’s two-star course, just like old pros. Naturally, we were all so elated with our rides and to have our horses still sound and happy.

Our CCIJ* team had an uncharacteristic day out on the course, but all finished nonetheless. There was some disappointment from the one-star riders themselves, but still, each of them was a class act and I think I speak for the rest of the Area VI team when I say that I felt even more proud of these girls for being such horsewomen, since I know it is not easy to keep smiling, patting your horse, and rooting for one another when you’ve had a rough day of your own. We all know that we are our toughest critics, but these girls truly inspired me with their great attitudes even when things didn’t go as planned.

Unfortunately, on Sunday morning, one of our CCIJ* horses was spun in the final horse inspection due to unfortunate luck and poor timing. We are all glad that he is healthy and happy, but of course, we all felt disappointment for Brianna Maroney, who was a champion and quite literally smiled her way through her tears just to keep supporting the rest of the team on through jogs and show jumping. If that isn’t a true supportive teammate and fierce competitor spirit, then I don’t know what is. 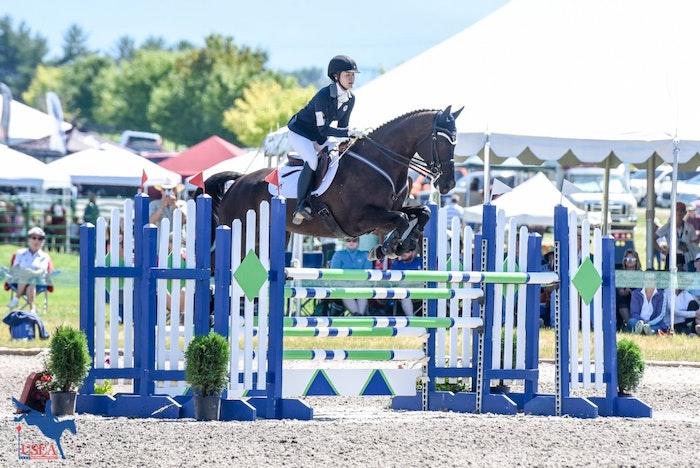 Show jumping concluded our weekend and although I wish I had jumped with fewer poles on the ground, I really did have the time of my life at Young Riders. It was bittersweet when the Area VI two-star team stood on the podium to receive the bronze medals because it was closing out a week filled with a new level of love and appreciation for my incredibly game horse, new friendships bonded by ridiculous inside jokes, pride stemming from phenomenal riding out of Area VI, and an insurmountable amount of encouragement for one another. Having the medal placed around my neck was also a reminder that all of the perseverance paid off; I had a “moment” when we were back at the barns, thinking about my road to NAYC.

With all the pressure during the week, I think I had forgotten that this is the biggest competition I’ve had in my life, and it has been a result of years of practice, ups and downs, and hard work. It’s such an indescribable feeling when you’ve worked so long for something and you can finally see it through. For any of the kids looking to ride on their team next year who are feeling like there’s just no way: from my experience, it can be quite shocking how things can change in just a year’s time. This can be true for better or for worse, but take it from me who sat in a hole a year ago thinking it couldn’t get any worse when of course it did again. I totally get that feeling that your goals seem ridiculously out of reach, trust me. Even when it seemed stupid for me to try, I did, and even when I almost decided it would be stupid to KEEP trying, I was lucky to have my trainer who encouraged me to keep going anyway. I made it, somehow. The main thing I took away from last week was that good support and an eager attitude can and will get you anywhere you want it to. So, super-duper cliche, but honestly, there’s no other way to explain it! 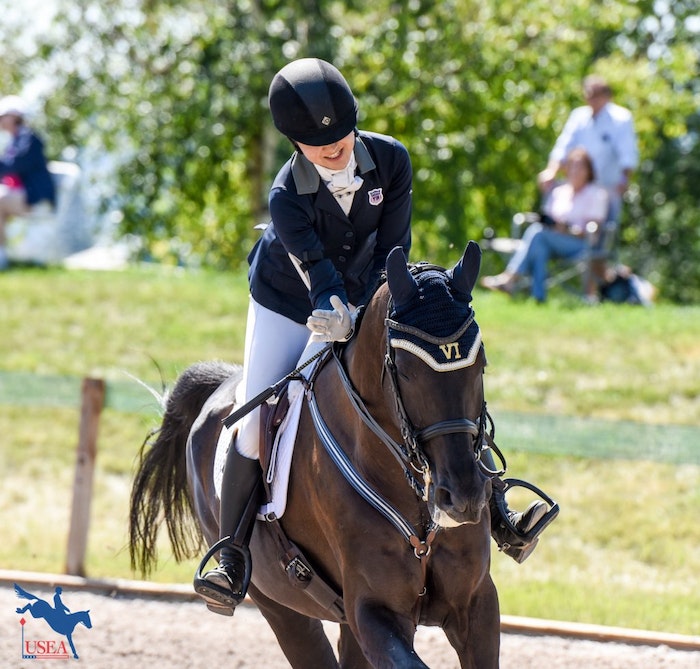 If you’ve made it this far in the blog, well, then I’d say you’ve probably got enough patience to achieve anything (excuse all my sappiness)! A huge thanks to the village behind me and Bones and all of the supporters of the Area VI team. Plus, a huge thank you to the dream team for being simply the best. Lastly, thank you to all of you and the USEA for having me as a blogger and for following our Road to NAYC! 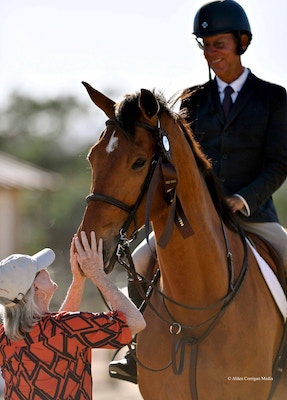